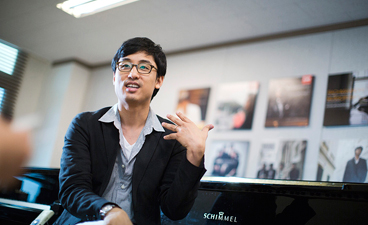 Professor Julius-Jeongwon Kim of the Department of Instrumental Music at the College of Music released the world’s first recorded album of Rachmaninov’s Piano Concerto No. 5. Performed in collaboration with the London Symphony Orchestra, this album also includes Shostakovich’s Piano Concerto No. 2 in F major.

Piano Concerto No. 5 is unfamiliar to many, even to those who are classical music aficionados. This is because Rachmaninov composed only four piano concertos during his lifetime. His desire to turn his Symphony No. 2 into a piano concerto was precluded by his death on March 28, 1943. Upon Rachmaninov’s grandson’s request nearly sixty years later in 2001, composer Alexander Warenberg arranged the piece into Piano Concerto No. 5.

Professor Kim performed this piece at the closing performance of the Seoul International Music Festival in May 2010. This performance of Piano Concerto No. 5 was the second in the world and the first in Asia. While this was a great honor for a pianist, Professor Kim called this “the greatest crisis of [his] career.” As Professor Kim recalls, “I received the score less than one and a half months before the performance. Although I had gladly agreed to perform the piece because of the meaning it held, I was soon discouraged and panicked when I came face to face with its heavy and complicated melody, asking myself ‘Can I really do this?’ I felt like I was going round in circles every day.”

In preparation for this historic performance, Professor Kim cancelled all other engagements and practiced for over 10 hours each day. He went to lengths to memorize the score of this lengthy 40-minute composition and successfully played the piece on the day of his performance. However, dissatisfied by the quality of his performance, he continued to practice the piece even after it had ended. Eventually, an opportunity to record Piano Concerto No. 5 for the first time in the world was proposed by the world-renown record label, Deutche Grammophon (DG). For Professor Kim, this album is significant not because it carries the honor of being “the world’s first” but because it enabled him to overcome his discouraging previous performance. He recalls, “Because so few have performed it, I could only experience Rachmaninov’s Piano Concerto No. 5 through its score. At first, I did not know where to begin. However, working by myself without the influence of the performances others has helped me confirm my wholeness as a pianist.”

Professor Kim’s schedule is tightly packed with performances. He tours around the world in Korea, Japan, and Russia and performs across a wide array of genres with various artists in his unique ensemble, Julius-Jeongwon Kim & Friends. He is also a member of the MIK Ensemble with violinist Soovin Kim, cellist Young Hoon Song, and violist Sangjin Kim. His Piano Concerto No. 5 album is gaining worldwide acclaim and Professor Kim is receiving numerous invitations to perform from countries throughout Europe and Asia. This album is Professor Kim’s first recording with Deutche Grammophon (DG). It is also the first album that he has recorded since beginning to teach at Kyung Hee University. Professor Kim also helped raise Kyung Hee’s international image by shooting the cover of his album at the Grand Peace Hall. He is currently preparing to record a solo album and a MIK Ensemble album.