A university must not only contribute to the development of scholarship but also to the betterment of society. With this belief, Kyung Hee University has made continuous efforts to fulfill the duties of a university. Such efforts include establishing the International Association of University Presidents, advocating the GCS Movement, leading the establishment of the UN International Day and Year of Peace, and publishing the World Encyclopedia of Peace. It also organized the Global Initiative 100 for Neo-Renaissance and held the 1999 Seoul International Conference of NGOs. Currently, Kyung Hee is planning the construction of the UN Peace Park and the Global NGO Complex (GNC) which will promote international cooperation in this global 21st century. These are the proud fruits of the cooperation of all members of the Kyung Hee Community. The diverse domestic and international volunteer medical activities are also a reflection of Kyung Hee's enterprising spirit and practical devotion to creating a better society and a more abundant future. 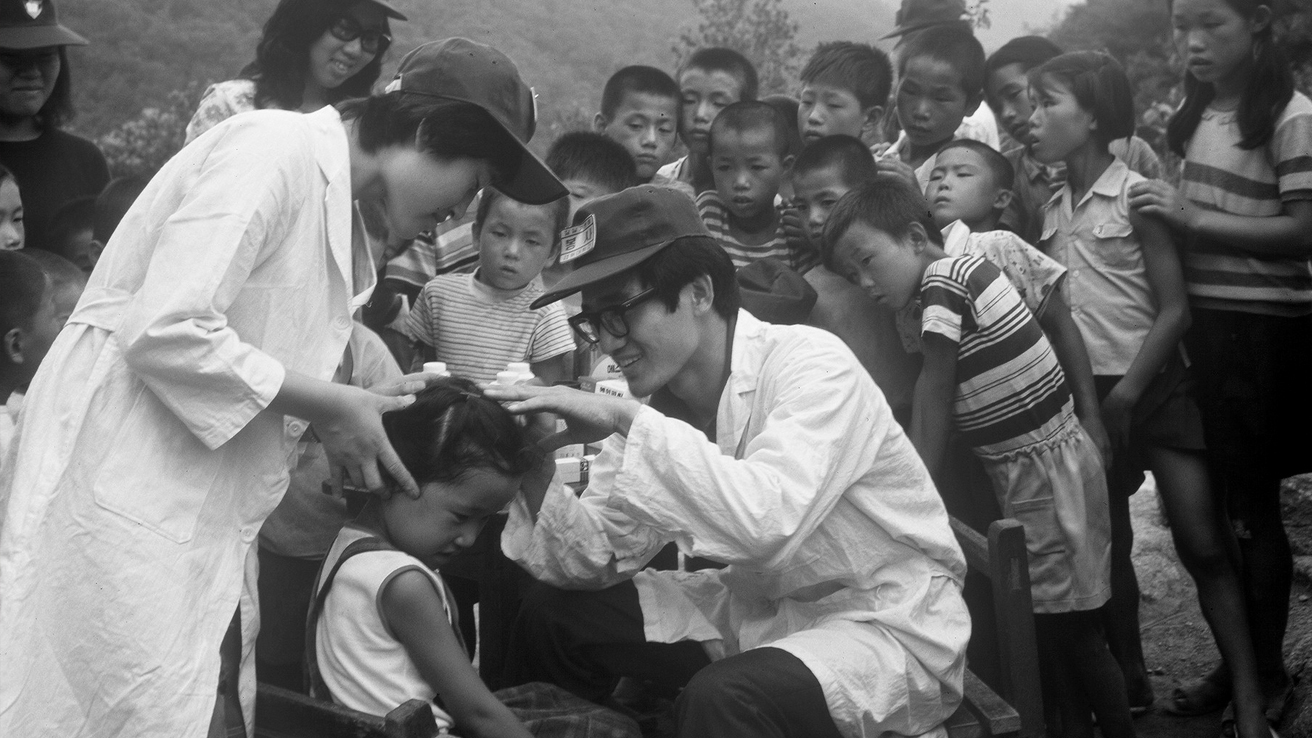 Amidst the ruins of the Korean War in the 1950s, Kyung Hee took the lead in eradicating illiteracy and enlightening the rural areas of the nation. Night schools were opened in the cities while a reformation of consciousness and volunteer activities in the rural areas healed the scars of war. Focus was put on lowering the staggering 73% illiteracy rate. When a shortage of fuel supplies led to deforestation, Kyung Hee focused on reforestation. The illiteracy eradication project, the rural enlightenment movement, and the consciousness reformation project gave rise to today's nationwide rural volunteer program.

the 1960s, Kyung Hee University established the Institute for Underdeveloped Society Studies to research the degenerative and regressive factors of Korean society. Founder Dr. Young Seek Choue compared Korea's economic successes and failures to those of more developed nations and analyzed the results to present alternatives in his book, The Way to Korea's Prosperity (1965). The main point of this book is that transforming consumers into producers to increase economic efficiency provides the foundations for a wealthy nation and that the key to doing so is through education. The Better Life Movement, which began with the publication of this book, played a pivotal role in the government's urbanization campaign, the Saemaeul Movement, that reverberated throughout the nation. 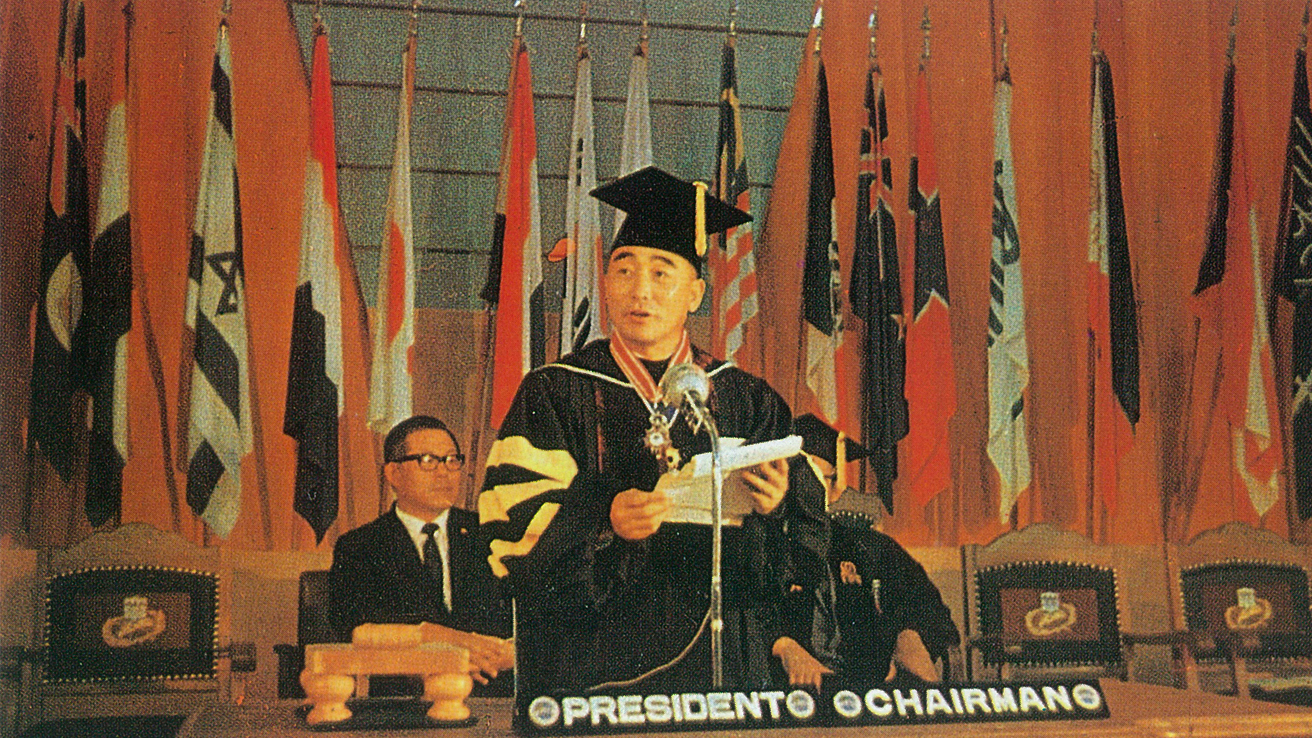 Kyung Hee University took the lead in establishing the International Association of University Presidents (IAUP) to lead the cultivation of intellectuals at the core of "creating a civilized world." The opening session took place on June 29, 1965 at Oxford University with over 170 university presidents and scholars in attendance. Dr. Young Seek Choue, a great advocate for the establishment of this association, served for 11 years--from 1971 to 1982--in three consecutive terms as the 3rd, 4th, and 5th president and was later named honorary president.
The IAUP, which was also appointed as a UN Peace Messenger, is opening the future of humanity through academic exchange and friendship among the world's university presidents. The association meets triennially and currently has a roster of 800 members. 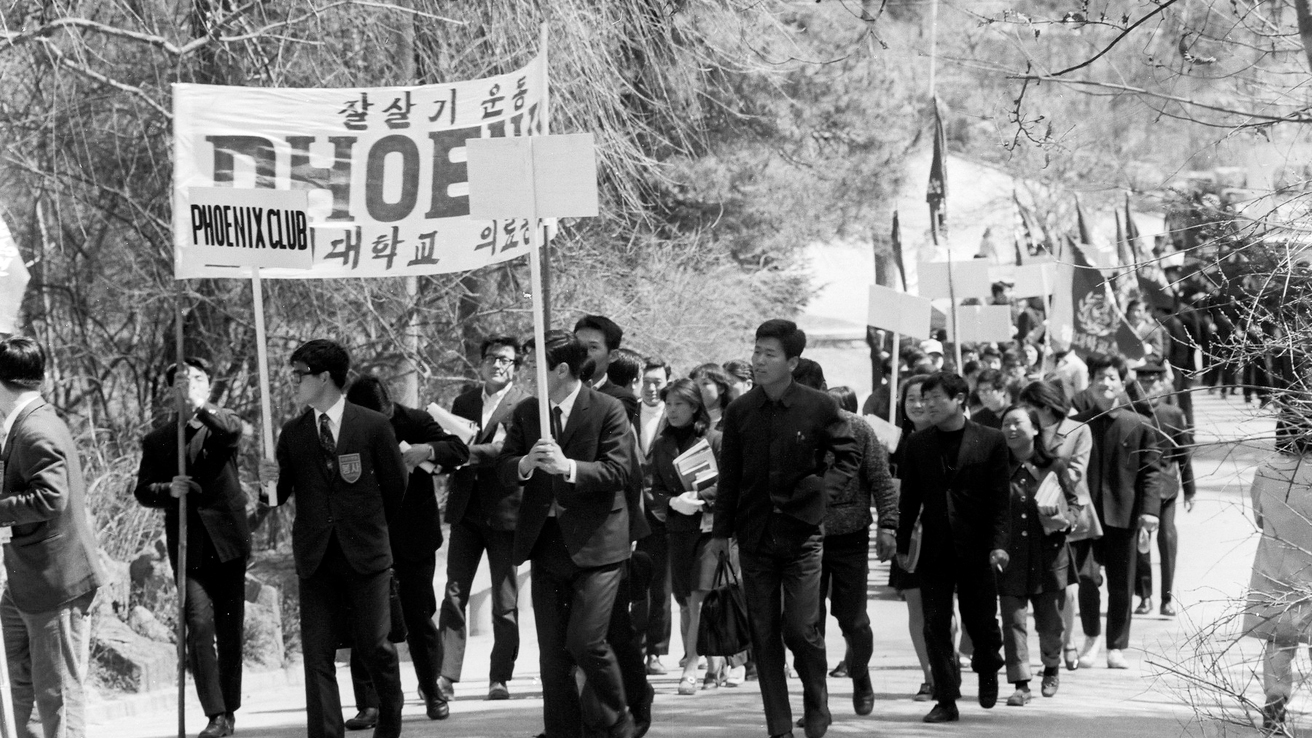 The GCS Movement began with a proposal by Dr. Young Seek Choue in 1975 as a social movement that has now spread worldwide. GCS is an acronym for Goodwill, Cooperation, and Service. As such, the GCS Movement's ultimate goal is to build an "Oughtopia" society in which human dignity is respected.
Individual isolation brought upon by industrialization, moral depravity, and the rise of crime is a common problem plaguing not just Korea but the world. Through a critical observation of these issues, Kyung Hee established the GCS Research Institute in October 1975 and declared the GCS Movement. In November of the same year, Dr. Young Seek Choue proposed the Boston Declaration on New Goals of Mankind at the fourth meeting of the International Association of University Presidents (IAUP). This "Boston Declaration" which was passed unanimously, espouses the principles of the GCS Movement to create a peaceful world centered on humanity.
In June 1978, the GCS International Korea was established, bringing together the 73 existing GCS clubs. That same year, the GCS International Club Headquarters was founded in Korea to propagate the movement to the world. 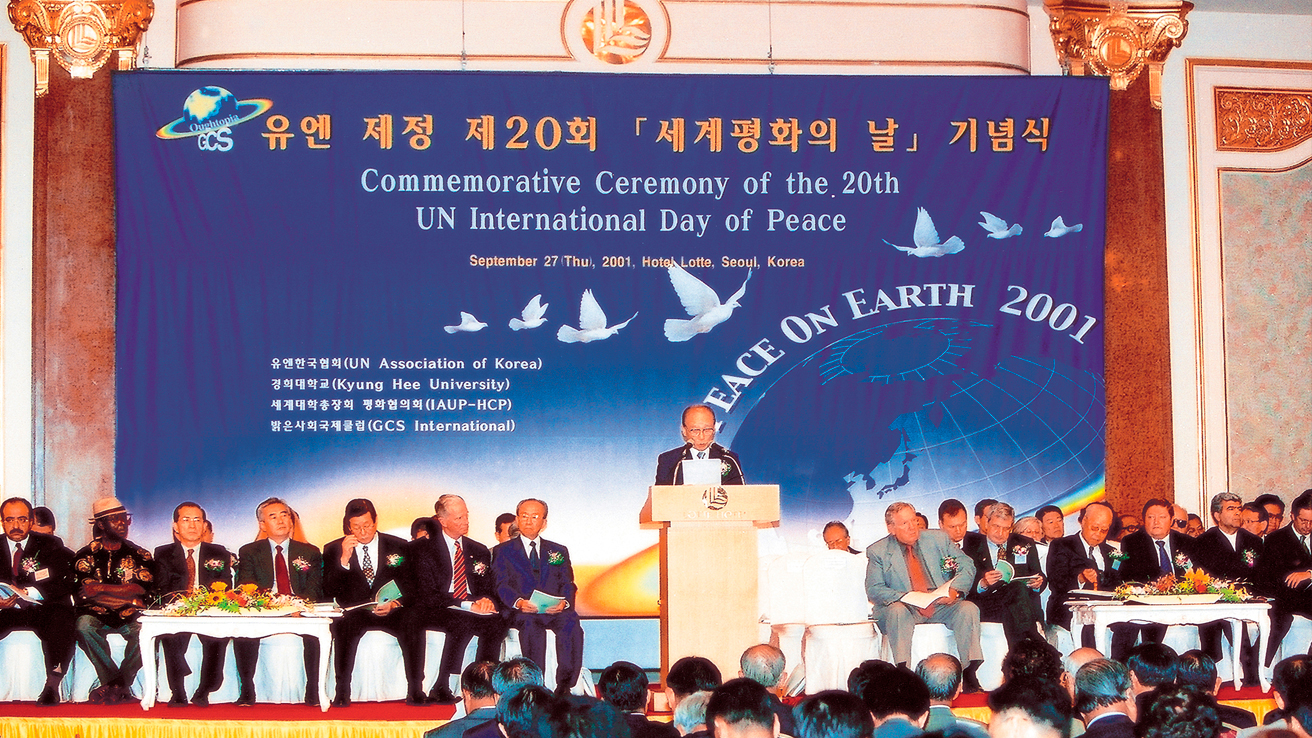 On January 1, 1986, the Year of Peace, American President Reagan and Soviet President Gorbachev sent each others' countries messages of peace to work together to achieve lasting world peace in light of the UN designated year of peace. Following this, the U.S. and the Soviet Union agreed to nuclear disarmament and a series of disarmament talks. Many of the world's conflicts were resolved. Former President Gorbachev visited Kyung Hee University in 1994 and praised the University's peace activities, saying that we would not be living in our current peaceful world if not for the International Day and Year of peace. 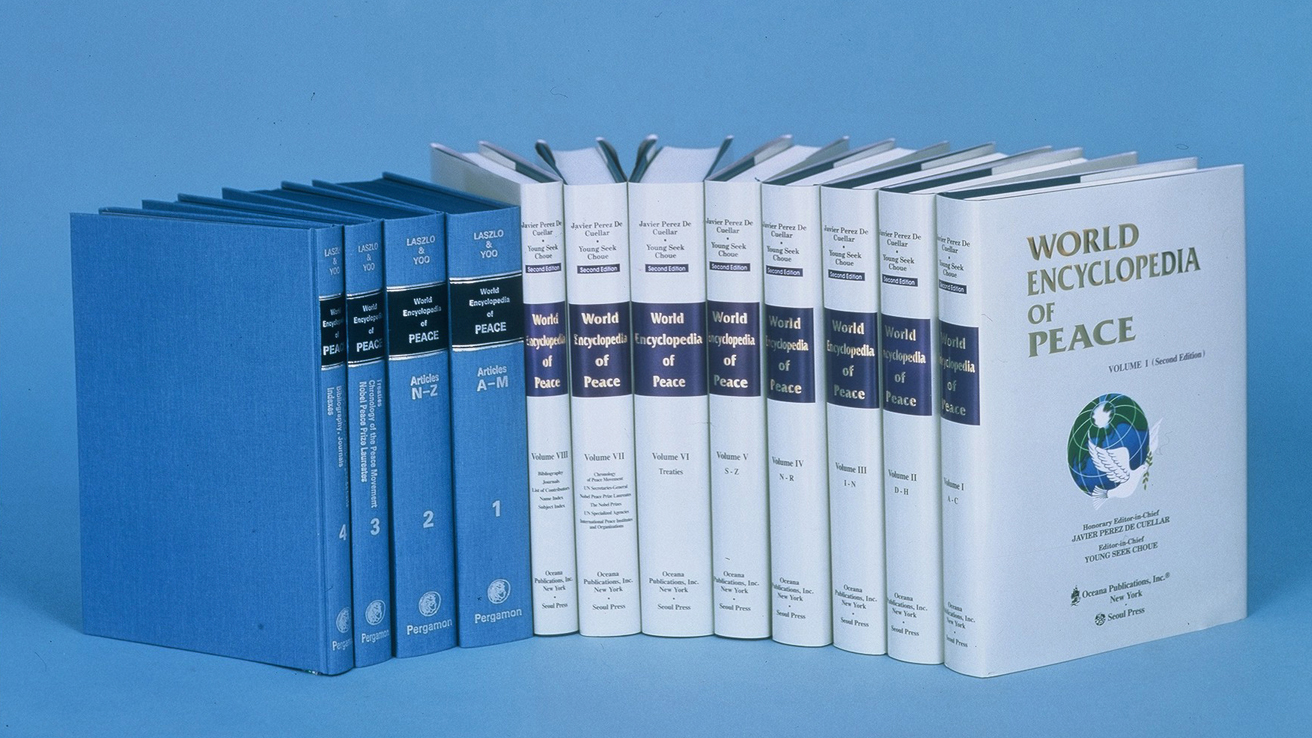 In commemoration of the UN International Year of Peace, Kyung Hee published the world's first World Encyclopedia of Peace in 1987. The purpose of this publication is to contribute to the peace education of the younger generation and to inspire a spirit of peace around the world.
World-renowned scholars, UNESCO, and FAO, as well as over 100 international organizations, took part in compiling and authoring this encyclopedia for four years, from 1983 to 1987. Following an increase in materials related to peace and developments in world affairs, the encyclopedia was expanded in 1996. The second edition was published after three years of preparation in October 1999, at the same time as the 1999 Seoul International Conference of NGOs. 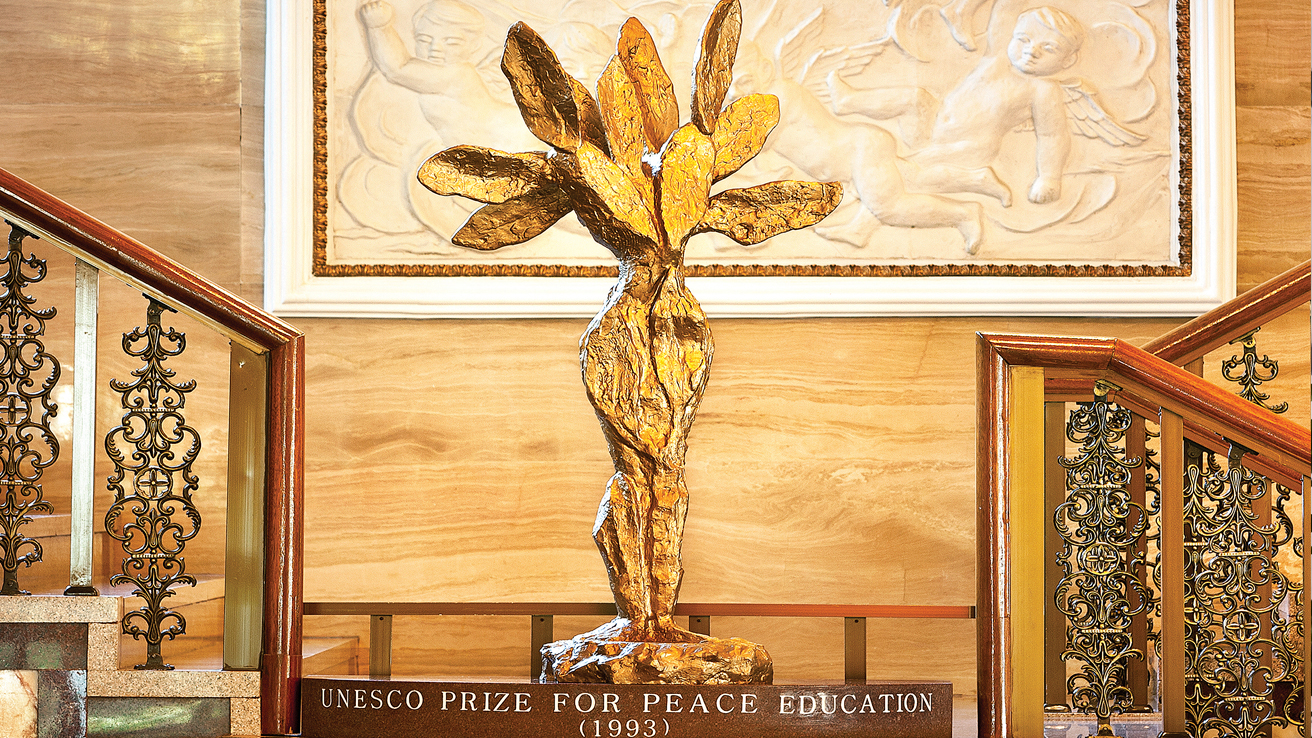 With high regard for the peace activities conducted by Kyung Hee University, UNESCO awarded the Graduate Institute of Peace Studies the "Prize for Peace Education" in 1993. Kyung Hee was the first in the nation to receive this honor and was the first university in the world to receive this prize. Past recipients of the prize include the Stockholm International Peace Research Institute, the International Physicians for the Prevention of Nuclear War, Guatemala's Rigoberta Mench？ Tum, Mother Theresa, and former UN Assistant Secretary-General Robert Muller. 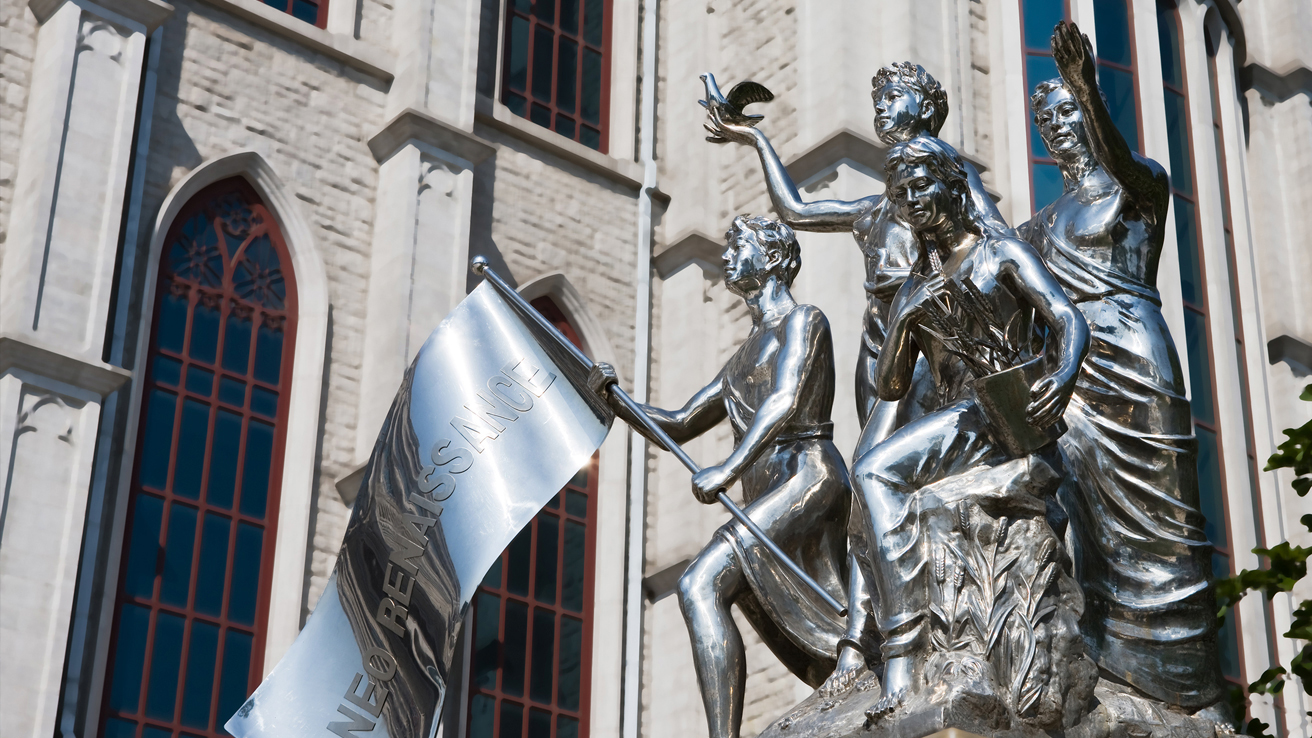 The roots of the Neo-Renaissance movement can be traced to Kyung Hee University's GCS Movement, World Peace Movement, and the Reconstructing Human Society Movement. For the "creation of a civilized world," Kyung Hee devoted itself to the Rural Enlightenment Movement and Better Life Movement in the 1960s, the GCS Movement in the 1970s, and the World Peace Movement in the 1980s.
In 1977, Kyung Hee University Founder Dr. Young Seek Choue spoke about the necessity of a second Renaissance at the Multinational Enterprise Conference in England. In September 1993, he met with former UN Secretary-General Boutros Boutros-Ghali to discuss the historical need for a new Renaissance. 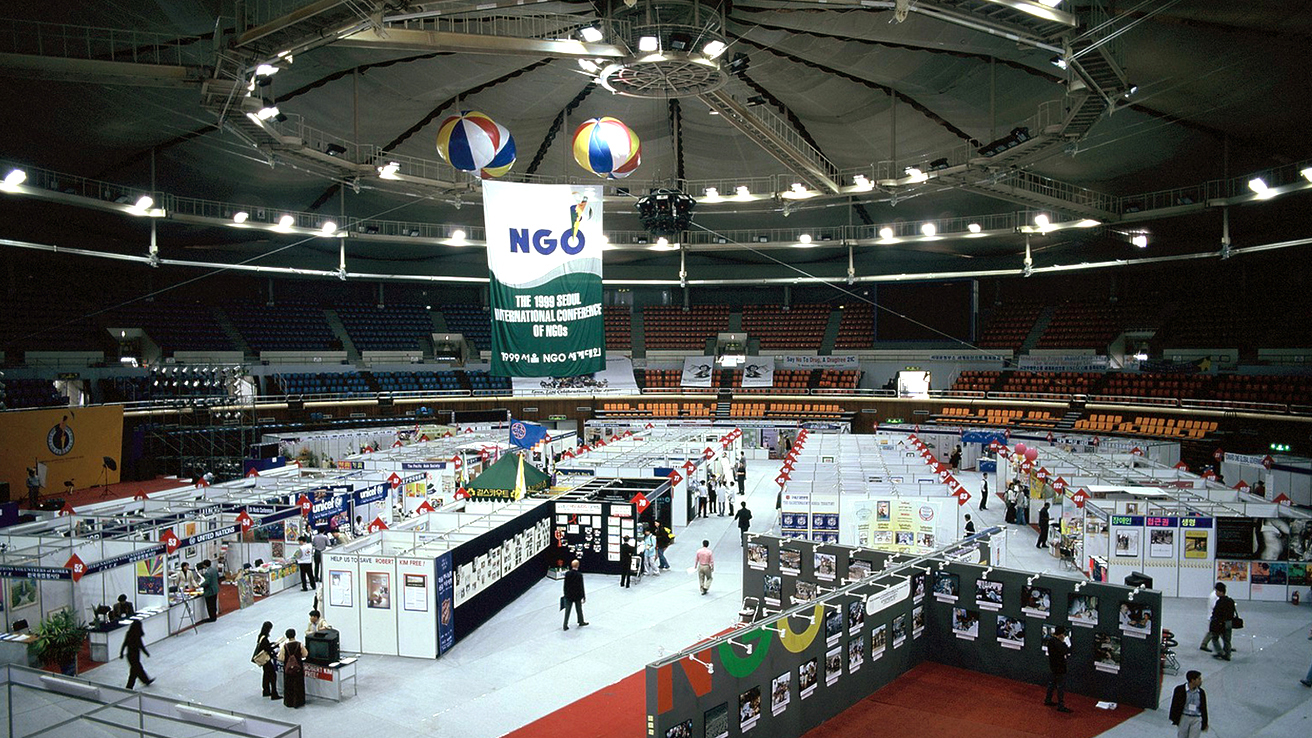 Recognizing the importance of civic organizations in the 21st century, Kyung Hee University organized the 1999 Seoul International Conference of NGOs. This conference discussed the topic of "The Role of NGOs in the 21st Century" by diagnosing society's problems and searching for the solutions and visions for a new millennium. This was the first conference of its kind--organized voluntarily by the world's NGOs--to be held in history. Over 13,000 participants from 108 countries discussed, debated, and searched for alternative resolutions to the dilemma of civilization from the NGO perspective.